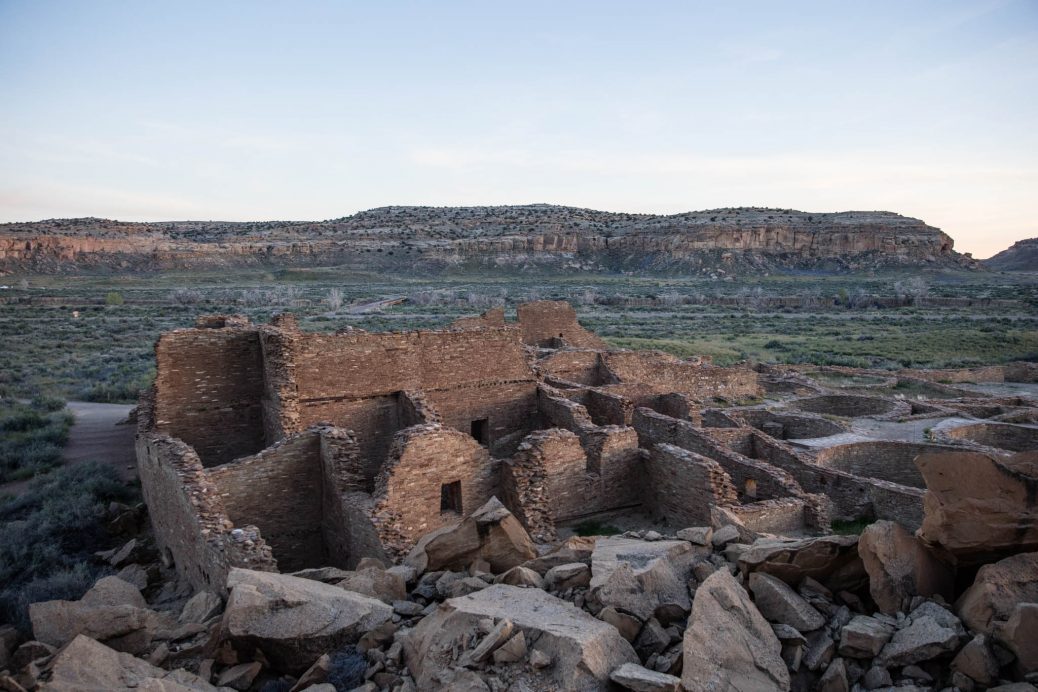 Albuquerque, NM (May 22, 2018) – The Navajo Nation and the Pueblo nations of the All Pueblo Council of Governors (APCG) applauded today the introduction of the Chaco Cultural Heritage Area Protection Act of 2018.  The legislation will withdraw roughly 316,076 acres of oil, natural gas, coal, and other minerals owned by the U.S. Federal Government from the Proposed Chaco Protection Zone. The legislation comes after several years of efforts to preserve this culturally significant landscape.

The bill sponsored by Senator Tom Udall and Senator Martin Heinrich will safeguard the areas surrounding Chaco Canyon National Historical Park – better known as Greater Chaco landscape – from unnecessary energy development. The legislation has been developed in collaboration with Pueblo and Navajo nations and is a significant moment in the long history of Chaco Canyon.

“The greater Chaco region is a New Mexico treasure. Many Tribes and Pueblos in Northern New Mexico can trace their ancestry and culture to Chaco, and consider these sites sacred,” U.S. Senator Tom Udall said. “But even as archeologists are making exciting new discoveries about this region, Chaco is being threatened by expanding energy development. I am proud of my work with New Mexico’s Pueblos and the Navajo Nation to craft this bill to protect this sacred, archaeological wonder. This bill reflects hundreds of public comments, and honors New Mexico’s history and culture, recognizing that some places are just too special to lose.”

The bill’s introduction comes just weeks after the Navajo Nation and APCG discussed for a second historic time how tribes in the Southwest can protect sacred sites and traditional cultural properties within the Greater Chaco Region. The first meeting between the tribes occurred in February 2017, and signified the importance of working together to protect historic and cultural sites in the San Juan Basin.

“The International community celebrates the Greater Chaco region as a UNESCO World Heritage Site, and it is time for the United States to join them in this recognition. The cultural and historical artifacts contained here are not only important to Native American Tribes, but also to all who come to learn from our past. But once this area is developed, it is gone forever. We thank Senator Udall and Senator Heinrich for their foresight and for working with Pueblo and Navajo nations on a bill to protect this beloved place.” said All Pueblo Council of Governors Chairman Edward Paul Torres.

Greater Chaco is recognized as one of the United States’ 22 UNESCO World Heritage Sites, as it was the center of Puebloan cultural and economic life during the 9th, 10th, and 11th centuries. The area holds thousands of artifacts and archaeological sites—some of which have yet to be identified and studied. Many tribes throughout the Four Corners area are the direct descendants of the Chacoan people and consider the region their traditional homelands.

“In our hearts and minds we still remember these places that our ancestors lived in. Chaco Canyon is and always will be a part of who we are. It is where our ancestors lived and where they continue to reside. Our ancient homeland should be forever preserved for future generations. Just as the United States takes great care to preserve churches and historic places, we urge them to do the same for our sacred places.” said Governor Thomas Moquino of Kewa Pueblo.

More than 90 percent of public lands within the area are already leased for oil and gas drilling, and Greater Chaco is at risk of being destroyed by drill pads, pipelines, and a web of industrial access roads. Earlier this year, U.S. Department of the Interior Secretary Ryan Zinke deferred the oil and gas sale near Chaco Canyon, but a federal judge reversed his previous decision that oil and gas development near the historic site violated federal law.

Laguna Pueblo Governor Virgil Siow added, “The tenuous protections from Secretary Zinke and uncertainty from the judicial system underscores the need for permanent protection for these sacred areas. That’s why Senator Tom Udall’s legislation is so important to us – it would ensure our history and culture is preserved for our children and grandchildren. Chaco Canyon and all of the sites that would be protected in this legislation are part of the diverse story of our country. This isn’t just our history as native people but it is the story of all people and should be respected and cared for as such. We thank Senator Udall and Senator Heinrich for their work with the tribal community and for this legislation.”

As oil and gas development has encroached on the park boundaries it has become necessary to build additional protections for Chaco Canyon and it’s outlier sites. New extraction technology including horizontal drilling is also a concern to tribes as it may negatively impact the integrity of the landscape and to the ancient buildings in the region.

The Bureau of Land Management’s (BLM) Farmington Field office – where the Greater Chaco area is located – is currently preparing a Resource Management Plan amendment that will shape future development in northwest New Mexico. Through this mineral withdrawal the APCG and Navajo Nation are wishing to leave this core protection zone preserved for future generations.

©2020 APCG All Pueblo Council of Governors