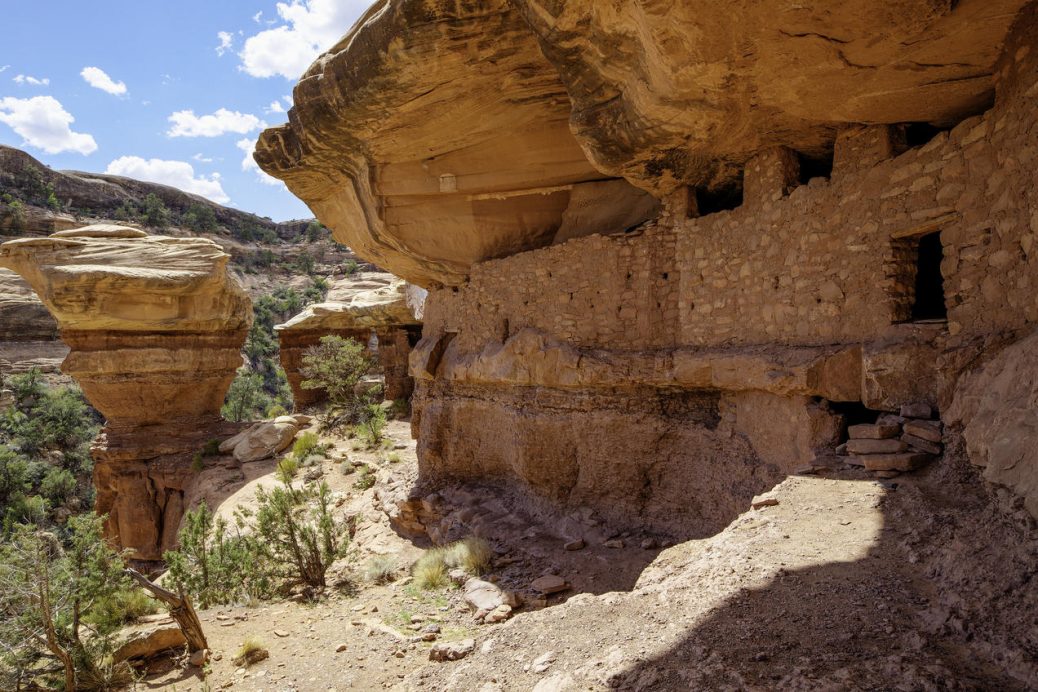 Bluff, UT – The All Pueblo Council of Governors, representing the collective voice of the member 20 sovereign Pueblo nations of New Mexico and Texas, convened last week Thursday in Bears Ears affirming commitment to protect the precious and vulnerable sacred sites within the Bears Ears cultural landscape.

At this two-day meeting, The All Pueblo Council of Governors accompanied by Tribal Historic Preservation officers and cultural resource protection leaders from the 20 Pueblos, traveled throughout the Bears Ears landscape for a series of field visits to ancestral kivas, great houses, and cliff dwellings, petroglyph and pictograph panels. The Council viewed first-hand the lands in southeastern San Juan County – a landscape with one of the highest densities of known cultural resources of any area of the United States. Pueblo leadership participated in overflights to view the vast landscape and impacts caused by oil and gas development in areas both protected by monument status and lands excluded as a result of the rescinding of the original 1.35 million acres monument boundary by 85% in 2017.

“This has been a critical time for us to revisit our ancestral lands located within what is now known as southeastern Utah. We have a living and ongoing connection to these lands as part of our collective story since time immemorial and our voices must be reflected in land management decisions taken at the federal and local levels. We’re deeply concerned by the path the current administration is taking at Bears Ears and lands east where oil and gas leasing is occurring without considering the input provided by our Pueblo nations and our cultural resource protection experts” – Chairman E. Paul Torres, All Pueblo Council of Governors

This meeting came at the heels of the Utah Bureau of Land Management’s quarterly oil and gas lease sale. Despite the protests of the Council and individual Pueblos citing the existence of Ancestral Pueblo sacred sites and traditional historic resources within the nominated parcels, the BLM Monticello Field Office issued leases for over 32,000 acres of public lands for oil and gas development in their September 2019 sale.

After hearing from agencies and organizations including the Utah Bureau of Land Management, the Bears Ears Inter-Tribal Coalition, Utah Dine Bikayah, Friends of the Cedar Mesa, the National Parks Conservation Association, Indian Nations Conservation Alliance, and the Wilderness Society among others, the Council addressed a series of resolutions to support increased protection of sacred sites and cultural resources in the culturally-rich lands between Bears Ears and Canyons of the Ancients National Monuments. Formal action was taken to request an immediate moratorium on leasing  in southeastern San Juan County until the agency work with Pueblos to conduct an ethnographic study of the landscape and fulfill federal statutes requiring tribal consultation on proposed development. Among congressional legislation formally supported by the Council aiming to restore and expand protections for the original monument boundary designation were Representative Deb Haaland’s BEARS Act and Senator Tom Udall’s ANITIQUITIES Act of 2019. The Council adopted stances to request the rescinding and revision of a number of the State of Utah’s and San Juan County’s associated administrative land planning documents including the County’s Master Plan and Resources Management Plan to include meaningful tribal consultation with Pueblos.

Among congressional legislation formally supported by the Council aiming to restore and expand protections for the original monument boundary designation were Representative Deb Haaland’s BEARS Act and Senator Tom Udall’s ANTIQUITIES Act of 2019. The Council adopted stances to request the rescinding and revision of a number of the State of Utah’s and San Juan County’s associated administrative land planning documents including the County’s Master Plan and Resources Management Plan to include tribal consultation with Pueblos.

“Until this area is protected, we are living in a state of uncertainty as the BLM moves forward with development that threatens—and has already irreparably harmed—our sacred sites and resources whether it be through oil and gas or other impacts associated with increased development like looting and vandalism. The Pueblos have an enduring responsibility to protect this region as it holds the sacred footprints of our people, whose spirits still reside in these places.” -Vice Chairman Michael Chavarria, All Pueblo Council of Governors